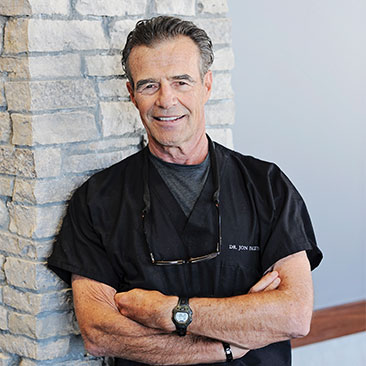 “In the more than 45 years I’ve been a dentist, I’ve had the opportunity to see the industry change from a practice and technology standpoint. I applaud my fellow dentists who have, like us, have been willing to invest their time and resources into leading-edge technology developed specifically for our industry. Embracing this technology has allowed my partners and me the ability to continuously offer the very best care and options for our patients.

“Knowing the way I practice today was much different than the way I practiced in the past and may be different from the way I’ll practice in the future is exciting. Having invested in next-generation equipment and learning new techniques and approaches to practice dentistry are a few of the many things that keep me excited about practicing; another is my patients.

“I’ve been blessed to have one of my children join me in my practice. The day my son became Dr. Jonathan Falkowski was a pivotal moment in my career. Suddenly, I was consulting with the same boy, now man, I used to coach in traveling baseball and say nightly prayers to. Practicing with Jonathan gave our staff and me a new and different kind of energy that has continued to benefit the practice.” — Dr. Falkowski

Dr. Jon S. Falkowski grew up in Northeast Minneapolis and attended DeLaSalle High School. He received his undergraduate degree and Doctorate of Dental Surgery from the University of Minnesota School of Dentistry, which makes him a total Gopher, through and through. He opened his Dakota County dental practice in 1975.

Dr. Falkowski has a long history of working in the community. He initiated Children’s Dental Health Month (February) in 1976 in the Farmington elementary schools and has screened literally thousands of elementary school students. In addition, he plays a role at his alma mater, De La Salle, by creating scholarships for future young men and women students. He enjoys giving back to the establishments that played a role in shaping his future. He has also been voted Top Dentist by Mpls.St.Paul Magazine for the past several years and is one of a few dentists to achieve honor-roll status.

The art of dentistry is constantly changing. Dr. Falkowski regards continuing education as a must to stay on the cutting edge. He remains current by taking continuing education courses, especially in sleep apnea, cosmetics, and CEREC® crown technology. In addition, he is a member of the American Dental Association, Minnesota Dental Association, Saint Paul District Dental Society, American Sleep and Breathing Academy, American Academy of Facial Esthetics and Cerecdoctors.

Dr. Falkowski and his wife Cindy have been married for nearly 40 years. He views her as the perfect combination of Martha Stewart, Mary Poppins, and a drill sergeant. Her organizational skills have been instrumental in our office development. The couple has been blessed with four children, 11 grandchildren, and four “grand Labradors” — one of which you could call the practice’s resident pup, Eddie. If you’re a patient, it’s likely you’ve seen him wagging his tail around the office.

Whether he’s having family over for Grammy’s homemade pizza or coaching his grandson’s baseball team, time with family is always priceless to Dr. Falkowski. Pheasant hunting and endurance sports such as running, biking, and triathlon training have always been a part of his life. Lately, if it is not snowing outside, you can usually find Dr. Falkowski on a golf course.